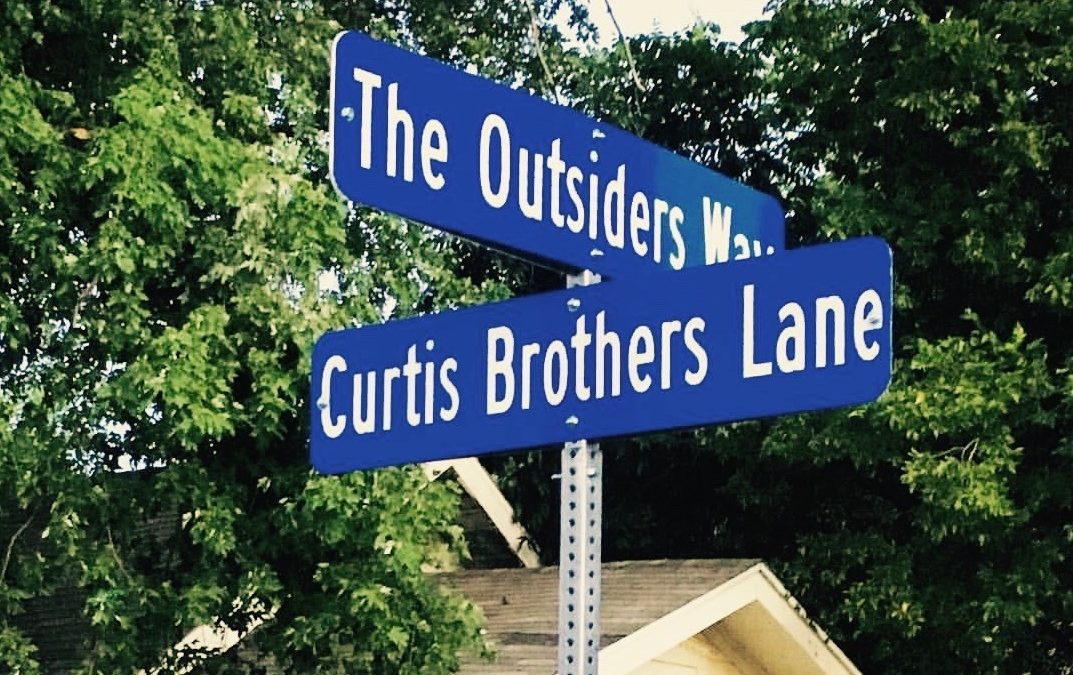 “Sometimes you wanna go where everybody knows your name…

…and you’re always glad you came…”

The familiar song from Cheers was always something I looked forward to. A show where people seldom died (except Coach RIP) and wonderful characters floated in and out, delivering verbal jabs but ultimately always there to remind each other they were important. I’ve personally never been able to patronize a bar stool. Beer makes me sleepy and harder alcohol is a ticket to the Land of Spinning Regret, but the spirit of Cheers is alive and well. Its address is the corner of Outsiders Way and Curtis Brothers Lane. I was fortunate enough to pay a visit at the height of last summer to see the early stages of the Outsiders House restoration process.

Playing the role of Sam in this metaphor is Zachary Matthews. I had spoken with Zach prior to my arrival and developed a quick text-based friendship. He was waiting at Tulsa International with a photographer in tow. We piled into a car and Zach suggested that we visit The Outsiders House before stopping at the hotel.

Zach! Do you realize I just flew for 6 plus hours, the longest stretch of which I was sandwiched between a very nice, but slightly ripe, real-life Hodor and a teenager with a head cold? It’s 106 degrees outside, Zach! A construction site?

My mind threw out protests when the barkeep suggested this particular concoction, but I sat back and allowed him to shake and pour what would turn out to be just what the doctor ordered.

I had been to Tulsa before, of course. My last visit was 34 years ago when I stepped off the plane as a 17-year-old. My return was one of those surreal moments where the new and the old were superimposed over one another. In many places, it seemed that Tulsa had remained the same. The Admiral Twin drive-in welcomed me. It had burned a few years before and Tulsa had worked to rebuild it. It marked the site I first heard the word “Action!” and thrilled at the adrenalin of filmmaking. This wasn’t just a visit to a location. It was a look back at the dreams of a 17-year-old with his entire life ahead of him.

Zach drove us across the river and into a familiar looking neighborhood.

“That’s where Johnny’s house used to be. And there’s the park…”

The park. The overwhelming heat of the day didn’t cure the cold memory of the fountain that no longer stood there. And I was the lucky one. I stayed mostly dry during those cold night shoots while Bob and Ponyboy were drenched. Ponyboy would get his revenge on a mountain top in a few months, leaving me in the snow to die.

We pulled up to the house. The doors and windows were open. A large fan did its best to cool the interior. It didn’t help, turning the place into a convection oven. The drywall was torn down and ceiling stripped back. It was the bare bones of a place that had little meat to start with.

I couldn’t have been happier.

Greeting me was the amiable drawl of Donnie Rich and Boston import Michelle Weagle with whom I had formed a relationship through social media and finally had the pleasure of meeting in person. The glow exuded was more than sweat. These were people engaged in something they love. These were the Restoration Faithful. Members of the Tulsa community had offered their services to fix the deteriorating aspects of this beloved location and you could feel it in the air. A new front door, built to the specs of the original, waited for installation. The front porch would soon be excavated and rebuilt. Furnishings that matched the props in the film were rolling in.

To the right of the front entrance, the stripped wall revealed a memory into my first real introduction to the power and genius of Francis Ford Coppola. When a tracking shot was desired following a fight between Ponyboy and Darry, the Academy Award-winning director had called out the set carpenters. With their circular saws in hand, they cut away and removed a large part of the wall, making it possible to dolly from an interior shot of the living room to an exterior of the front porch as Ponyboy fled. The replaced plywood bore the year of its placement. 1982. I stood on the porch so many years later and looked down at the memory of a slack-jawed teenager who had watched the scene take place. This was magic and nobody does it better than FFC. 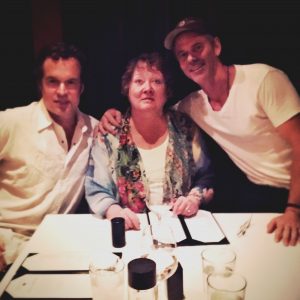 After a quick tour through the bare bones of these wonderful memories, I checked into the hotel and washed off the Oklahoma stickiness for a very special evening:

Dinner with Ms. S.E. Hinton and the lifetime bearer of her literary alter-ego, C. Thomas Howell.

“He-whose-name-is-a-complete sentence” has been my closest friend for decades. Ever since we saved the world from the Russian invasion. We got along fine during Outsiders filming but the kid just never stopped working. It’s hard to bond when you’re trying to drown someone in the freezing cold. I knew what I would get when sitting down at the plush restaurant with C.T; witty and spicy with a heaping helping of little brother. Our focus was on the Mama Bear herself. I’ve had the pleasure of Suze’s company since our time filming her seminal novel. When they created the word “Authentic,” they had Susan Eloise Hinton in mind. It was one of those evenings that takes on a timeless quality where past and present meet.

The next morning, Ponyboy and I hit the links for a round of golf with a gathering of Tulsa Country Club members. This is a Soc’s heaven. The fact that I haven’t swung a golf club in months was kept hidden for the moment by a deluge of rain. It proved to be an entertaining delay and the hosts were excellent. When the rain finally stopped, I got my turn over the ball. The course was beautiful. I should know. I checked out every bush and tree that lined the fairway.

In the evening was the main event. The love that people have for the book and movie always raises me up. The man responsible for this entire trip through such a wonderful part of my past was here. Danny O’Connor aka Danny Boy had taken it upon himself to save a crumbling house destined for demolition. I had met Danny while joining his podcast and liked him immediately. A towering presence, his dedication as a curator on such a wonderful part of my life was inspiring. It inspired the troops that surrounded him and the crowds that came to help raise funds for the effort.

The throng of fans that attended the evening was amazing and polite. Even to a Soc. It was a testament to the power of the book and the film I had stepped off of a plane so long ago to experience. As that theme song says, “You want to go where people know, People are all the same.” We were all gathered to celebrate the message behind the movie. For me, it was a trip back across the tracks that separate the dreams of a young man with the struggles of mid-life.

As I left Tulsa. Michelle Weagle gifted me with a silver pendant. Engraved on the pendant were the words “Trust Your Journey.”

What a journey it has been.